How to Mount NTFS Partition in Linux

NTFS stands for New Technology File System. This file-storing system is standard on Windows machines, but Linux systems also use it to organize data.

Most Linux systems mount the disks automatically. However, in dual-boot setups, where file exchange is required between two systems with NTFS partitions, this procedure is performed manually.

This article will show you how to mount an NTFS partition in Linux with read-only or read-and-write permissions. Note: A read-only partition allows users to read files. To enable writing to an NTFS partition, refer to the second section of the article.

Before mounting an NTFS partition, identify it by using the parted command: In the example above, two NTFS partitions are on the /dev/sdb disk. Note the partition number you want to mount before you proceed.

You can also use the fdisk and grep commands to show only NTFS partitions on a disk:

In this example, we will mount the /dev/sdb1 partition with read-only permission.

First, create the mount point with the mkdir command:

Use the disk free tool to check the details of all filesystems and verify you mounted the partition successfully: 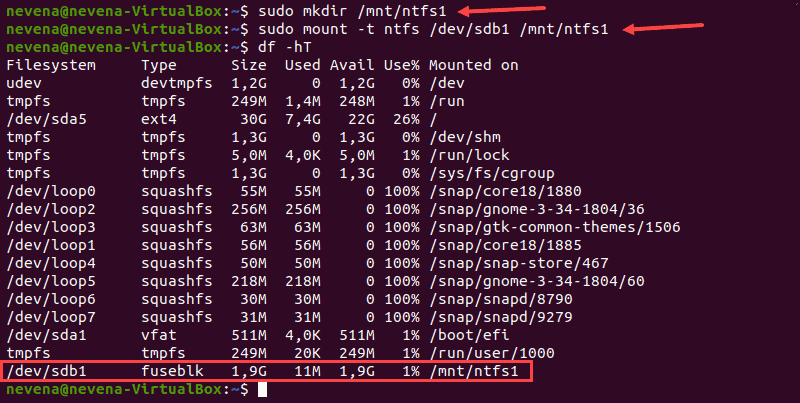 The /dev/sdb1 partition shows as mounted at the bottom of the list. You now have read-only access for this NTFS partition.

To mount an NTFS partition with read-and-write permissions, you need to install fuse and ntfs-3 on your system.

Follow the steps below to complete the mounting process.

Note: Some Linux distributions may have fuse and ntfs-3g already installed by default.

Run the following command to download and update the package repositories:

To install fuse on your Linux system from the default repository, use the appropriate package manager. In our example, we use apt in Ubuntu.

When the installation completes, install ntfs-3g by running:

In case both fuse and ntfs-3g are already installed, the output looks similar to the one below:

After you install the fuse and ntfs-3g software packages, mount your NTFS partition.

First, create a mount point by using the mkdir command :

Next, use the mount command to mount the partition you want. For example, /dev/sdb2:

To check if the partition is mounted, run the df command: You now have the read/write permissions for the NTFS partition you mounted.

After reading this article, you should have learned to mount an NTFS partition. Partition manipulation is crucial in a Linux system, and next, we recommend learning how to delete a partition in Linux and how to format disk partitions in Linux.

Nevena Pavlicic
Nevena Pavlicic is an aspiring Technical Writer at PhoenixNAP with experience in writing user manuals and blog posts. She has always enjoyed researching and building knowledge on cutting edge technologies, but she is also passionate about simplifying complex concepts.
Next you should read
Bare Metal Servers SysAdmin
How to Delete Partition in Linux
Creating and deleting partitions in Linux is common because users must structure storage devices...
Read more
Bare Metal Servers SysAdmin
How to Create Partitions in Linux
In Linux systems, in order to use storage devices such as Hard Drives and USB drives, you need to understand...
Read more
DevOps and Development SysAdmin
19 Crucial Linux ls Commands to Know
The ls command (short for 'list') lists information about directories and any type of files in the working...
Read more
SysAdmin Web Servers
Linux Commands Cheat Sheet: With Examples
A list of all the important Linux commands in one place. Find the command you need, whenever you need it or...
Read more
© 2021 Copyright phoenixNAP | Global IT Services. All Rights Reserved.