Docker is a software that offers a set of platform-as-a-service products for developing and deploying applications by packaging software in containers.

Containers are lightweight, portable, virtual environments that developers can share without risking inconsistencies in development. Due to these incredibly useful features, many organizations have switched from using virtual machines to Docker containers.

Like any other software, Docker introduces users to a new range of terminology related to its services. Users need to get acquainted with concepts such as Dockerfiles, images, containers, and other Docker-specific words. Once you have mastered the vocabulary, the next step is to get used to using Docker commands. A list of all the commands and options is quite extensive and would take time to learn them all by heart.

No matter if you are new to Docker or already have some experience with containerization, it is always good to have a reference point for all the common Docker commands.

In this tutorial, you will find the most common Docker commands along with a downloadable cheat sheet. 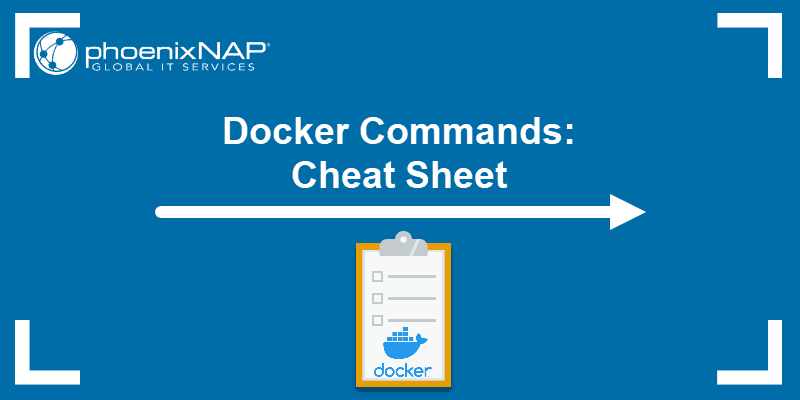 In this section you will find the most important commands related to the lifecycle of Docker containers.

Create a container (without starting it):

Run a command in a new container:

docker run --rm [IMAGE] – removes a container after it exits.

docker run -it [IMAGE] – starts a container, allocates a pseudo-TTY connected to the container’s stdin, and creates an interactive bash shell in the container.

docker run -it-rm [IMAGE] – creates, starts, and runs a command inside the container. Once it executes the command, the container is removed.

Delete a container (if it is not running):

Update the configuration of one or more containers:

Visit our detailed guide on how to update Docker container and image to the latest version for more information.

The following commands show you how to start and stop processes in a particular container.

Stop a running container and start it up again:

Pause processes in a running container:

Unpause processes in a running container:

Block a container until others stop (after which it prints their exit codes):

Kill a container by sending a SIGKILL to a running container:

Note: If you are still unsure of how Docker images and containers differ, you may want to check out the article on Images vs Containers.

Below you fill find all the necessary commands for working with Docker images.

Create an image from a Dockerfile:

Pull an image from a registry:

Push an image to a registry:

Create an image from a tarball:

Create an image from a container:

Load an image from a tar archive or stdin:

Save an image to a tar archive, streamed to STDOUT with all parent layers, tags, and versions:

Once you set up your containers, you will need to know how to get all the important information for managing them. The following commands will provide details on images and containers on your system.

Show port (or specific) mapping for a container:

Show running processes in a container:

Show changes to files (or directories) on a filesystem:

List all images that are locally stored with the docker engine:

Show the history of an image:

One of the most valuable features of Docker software is the ability to connect containers to each other and to other non-Docker workloads. This section covers network-related commands.

Remove one or more networks:

Show information on one or more networks:

Connects a container to a network:

Disconnect a container from a network:

You can find all the listed commands in a convenient one-page reference sheet seen below. To save it for future use, you can also download our Docker Command Cheat Sheet. 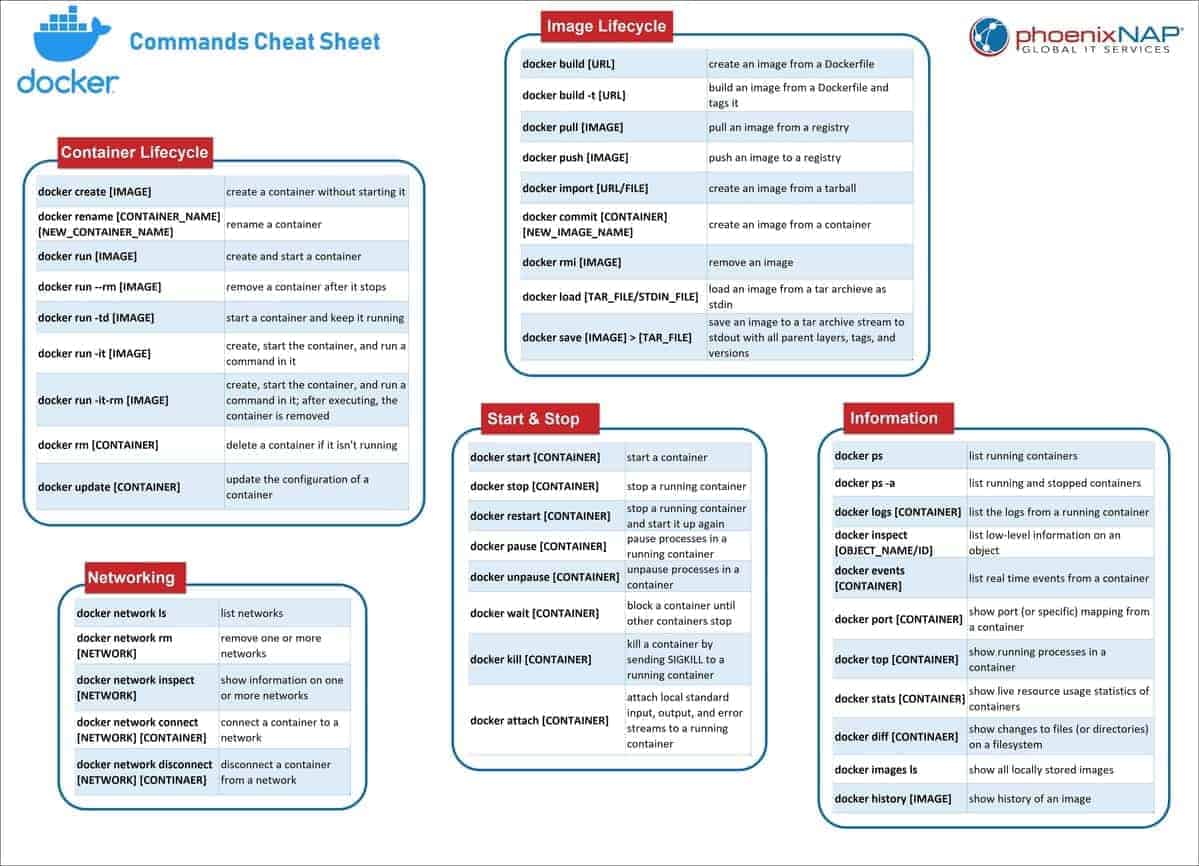 This list of commonly used Docker commands should help you become more familiar with them. The cheat sheet will be helpful when you want to create and manage containers, images, and networks.