How to Install Nvidia Drivers on Ubuntu 20.04

Home » SysAdmin » How to Install Nvidia Drivers on Ubuntu 20.04

Nvidia GPUs (graphics processing units) have exceptional parallel computing potential, much higher than that of CPUs. That is why GPUs are becoming the main choice for high-performance workloads.

In this tutorial, you will learn how to install the latest proprietary Nvidia drivers on Ubuntu 20.04. 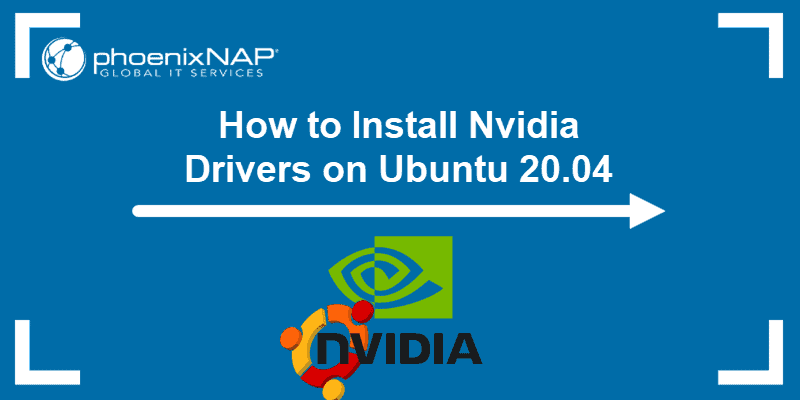 Note: Learn why and how GPUs are used for machine learning and AI in our article on GPU Machine Learning.

Ubuntu comes with open-source Nouveau drivers for Nvidia GPUs out of the box. The Nouveau driver does not harness the GPU’s full power and sometimes performs worse or even causes system instability. Nvidia proprietary drivers are much more reliable and stable.

The first way to install Nvidia drivers is by using the GUI Software & Updates app.

Step 1: Open Software and Updates From the App Menu

1. Open the Applications menu and type “software and updates.”

2. Select the Software and Updates app.

The driver installed on your machine is selected by default. It is usually an open-source Nouveau display driver.

1. From the list, select the latest Nvidia driver labeled proprietary, tested. This is the latest stable driver published by Nvidia for your GPU.

3. Enter your password and wait for the installation to finish.

Restart the machine for the changes to take effect.

The second way to install Nvidia drivers is by using the terminal.

1. Open the terminal by pressing Ctrl+Alt+T or search for “terminal” in the Applications menu.

The output shows a list of available drivers for your GPU.

Before installing the driver, make sure to update the package repository. Run the following commands:

Step 3: Install the Right Driver for Your GPU

1. Choose a driver to install from the list of available GPU drivers. The best fit is the latest tested proprietary version.

2. The syntax for installing the driver is:

For this tutorial, we installed nvidia-driver-340, the latest tested proprietary driver for this GPU.

Reboot your machine with the following command:

The PPA repository allows developers to distribute software that is not available in the official Ubuntu repositories. This means that you can install the latest beta drivers, however, at the risk of an unstable system.

To install the latest Nvidia drivers via the PPA repository, follow these steps:

1. Add the graphics drivers repository to the system with the following command:

2. Enter your password and hit Enter when asked if you want to add the repository.

To verify which GPU model you are using and to see a list of available drivers, run the following command:

The output shows your GPU model as well as any available drivers for that specific GPU.

1. To install a specific driver, use the following syntax:

For example, we installed the nvidia-340 driver version.

In this example, no changes were made as the recommended driver is already installed.

Reboot the machine for the changes to take effect.

How to Uninstall Nvidia Driver

If you want to uninstall the proprietary Nvidia driver, the best option is to remove --purge the driver.

To check which Nvidia packages are installed on the system, run the following command:

The output returns a list of all Nvidia packages on the system.

Note: The ubuntu-desktop package could also be purged because it is a dependency of the nvidia-common package, so you may need to reinstall it if it gets removed.

The command purges every Nvidia package from the system.

2. If the ubuntu-desktop package is removed, reinstall it with the following command:

Reboot your system by running sudo reboot. By default, the system loads the open-source Nouveau driver during boot.

You now know how to install proprietary Nvidia drivers on your system using the GUI app, official Ubuntu repository, or the PPA repository if you want the beta versions.

You also know how to uninstall Nvidia drivers if you want to go back to using the open-source Nouveau driver.

Boško Marijan
Having worked as an educator and content writer, combined with his lifelong passion for all things high-tech, Bosko strives to simplify intricate concepts and make them user-friendly. That has led him to technical writing at PhoenixNAP, where he continues his mission of spreading knowledge.
Next you should read
Networking SysAdmin
How to Install Puppet on Ubuntu 20.04
Puppet is an open-source solution that helps you perform administrative tasks remotely. This tutorial takes...
Read more
SysAdmin Virtualization
How to Install KVM on Ubuntu 20.04
KVM (short for Kernel-based Virtual Machine) is a Linux kernel module which enables creating and running...
Read more
Networking Web Servers
How to Install and Configure Nginx on Ubuntu 20.04
Nginx is an open-source application used for managing web servers, load balancing, and security. This...
Read more
Bare Metal Servers SysAdmin
How to Install NVIDIA Tesla Drivers on Linux or Windows
Growing demands for extreme compute power lead to the unavoidable presence of bare metal servers in today's...
Read more
© 2021 Copyright phoenixNAP | Global IT Services. All Rights Reserved.