How to SSH into a Running Docker Container and Run Commands

Docker is a utility that lets you create a container for running applications. A Docker container is a fully-contained virtual machine.

This guide will show you three methods to SSH into a Docker container and run commands. 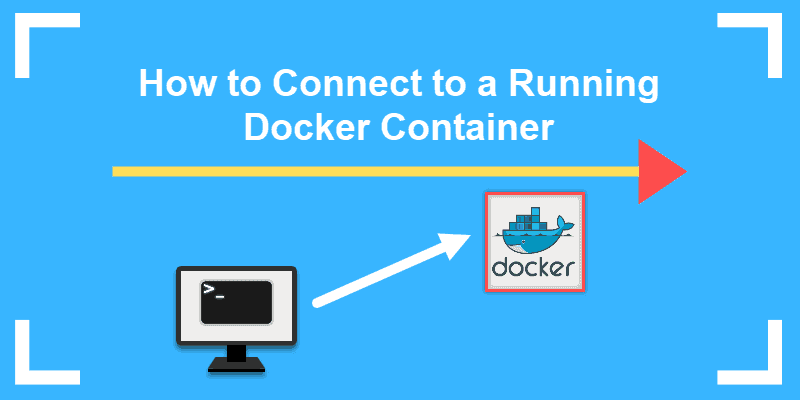 Method 1: Use docker exec to Run Commands in a Docker Container

The docker exec command runs a specified command within an already running container. You can use it to SSH into a Docker container by creating a bash shell (a shell where you can type commands).

Start by pulling a Docker image if you haven’t already. For example, you can load Nginx:

Then, run the image:

You should now see your nginx-test image loaded.

To get access and run commands in that Docker container, type the following:

Now, you are logged in to the nginx-test container. Therefore, any commands you enter will perform in that container. The –i option specifies interactive, and the –t enables a terminal typing interface.

Method 2: Use the docker attach Command to Connect to a Running Container

The docker attach command links a local input, output, and error stream to a container. By default, it launches in a bash shell. To connect to a running container, enter the following:

In the example below, the system will connect to the nginx-test container:

Once the command is executed, you will be working in the container. Any commands you run will affect the virtual Docker environment.

Method 3: Use SSH to Connect to a Docker Container

You can connect to a Docker container using SSH (Secure Shell). Normally, SSH is used to connect remotely over a network to a server. The technology works the same when connecting to a virtual Docker container on your system.

Important: We do not recommend this method, since it inflates the image beyond the normal scope. You will need to have an image with SSL already configured for this to work.

Start by installing and enabling the SSH service:

Step 2: Get IP Address of Container

Get the container’s IP address by using the docker inspect command and filtering out the results:

The system will display the IP address as seen in the image above.

Ping the IP address to make sure it’s available:

Use the SSH tool to connect to the image:

The system should prompt for a password of the root user for that container. If it says Connection refused, likely the container is not provisioned for SSH. If the prompt changes, you are now connected via SSH, and can run commands in the container.

If you are provisioning multiple remote virtual machines, you could use the docker-machine ssh command to connect to a virtual machine through Docker. For most users, the first two command methods are recommended.

Sofija Simic
Sofija Simic is an aspiring Technical Writer at phoenixNAP. Alongside her educational background in teaching and writing, she has had a lifelong passion for information technology. She is committed to unscrambling confusing IT concepts and streamlining intricate software installations.
Next you should read
DevOps and Development SysAdmin Virtualization
How To Install Docker on Debian 10 Buster
Docker is a virtual container management tool that speeds up and improves application development. Created...
Read more
DevOps and Development Virtualization
How to List / Start / Stop Docker Containers
A Docker container uses an image of a preconfigured operating system environment. Images are often a...
Read more
Virtualization
How to Share Data Between Docker Containers
Docker allows users to run applications isolated from a host computer, without the necessity of having...
Read more
DevOps and Development
How To Remove Docker Images, Containers, Networks & Volumes
Docker allows users to create a container in which an application or process can run. In this guide, you will...
Read more
© 2021 Copyright phoenixNAP | Global IT Services. All Rights Reserved.