Home » DevOps and Development » How to Install Yarn on Ubuntu 18.04

Yarn is a tool for managing, updating, and sharing your Java code. Yarn works through node.js helping to track libraries, dependencies, and even enables you to share solutions with other developers.

In this tutorial learn how to install Yarn on Ubuntu 18.04. 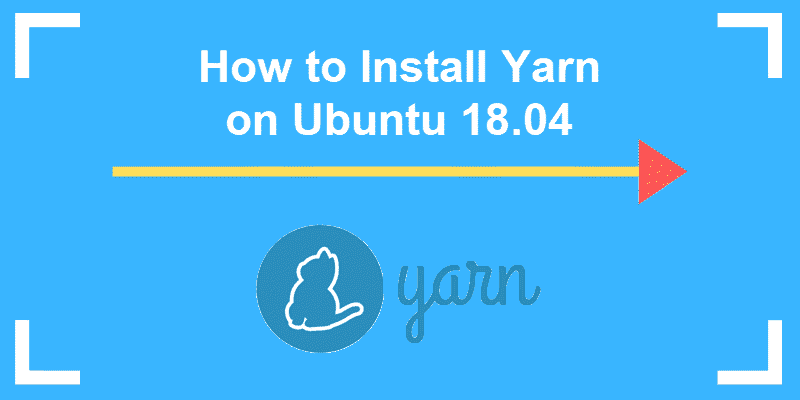 Yarn developers maintain a repository for installing directly to Ubuntu that simplifies the installation process. For detailed inustrctions, follow the steps below.

Open a terminal window, and add the GPG key:

Now, your standard package manager can access and manage Yarn.

This command installs Yarn on your system. If you don’t already have node.js installed, your package manager will install it for you.

To verify a successful installation, display the Yarn version:

1. Start by listing the version to check if NPM in installed:

If you don’t have npm, install it by running the following command:

2. To install Yarn with npm:

Upon installing, the output should notify you which version of Yarn has been installed. In the example above, it is version 1.17.3.

In many ways, Yarn is very similar to npm. Yarn adds a yarn.lock file, which restricts packages to a specific version. This is especially helpful for maintaining a consistent development environment.

How to Upgrade Yarn Version

To upgrade Yarn to the latest version, run the following command from the terminal:

The system will download the Yarn tarball and install the latest version. The image below displays the output you can expect. 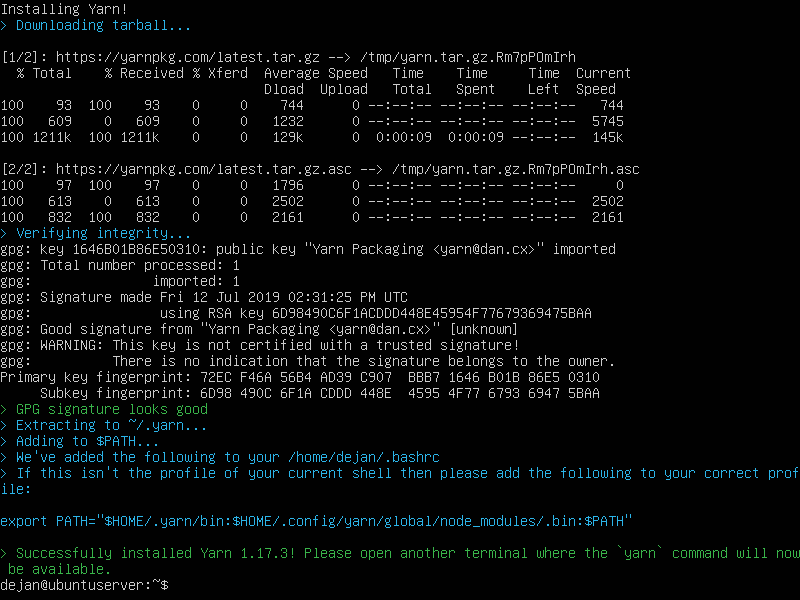 Now that you have Yarn installed, the sections below dive into how to use basic Yarn commands.

To create a new project, enter the following:

The system will launch a script that will ask questions about the project. Press enter to use the default for each entry.

Add a Dependency to Your Project

A package (sometimes called a module) is a self-contained piece of code. It holds all the components needed to run or work on the code. A package may rely on other packages. These are called dependencies, because the package needs them to function.

To Install a dependency, enter the following:

The command above adds the latest version of the named package.

To install a specific version, enter the following:

If the package has a tag, simply substitute [version] for [tag]:

This process automatically updates the package.json file. It also updates the yarn.lock file. This ensures that everyone using the package is working with the same software.

To upgrade a dependency, use the command:

Like the add command, Yarn can be upgraded by version or tag:

Remove a dependency by entering the command:

Yarn works through the package.json configuration file. This file keeps a record of all the packages required for your project. When you’re working on a code project, you may add a package that has additional dependencies.

To install these dependencies, enter the following:

This will update and load all the dependencies for your project configuration.

Yarn is set up to allow multiple users, and to control versions. In some cases, a different developer may add a package to the master package.json file. If that’s the case, you should run the yarn install command as soon as possible. This will update your version of the project, and ensure that you’re working in the same environment.

You should now have a good understanding of how to install Yarn on an Ubuntu system. We also covered basic commands for working with Yarn projects.

Dejan Tucakov
Dejan is the Head of Content at phoenixNAP with over 7 years of experience in Web publishing and technical writing. Prior to joining PNAP, he was Chief Editor of several websites striving to advocate for emerging technologies. He is dedicated to simplifying complex notions and providing meaningful insight into data center and cloud technology.
Next you should read
DevOps and Development SysAdmin
How to Uninstall or Remove Software Packages From Ubuntu
This guide will walk you through several methods for removing old or unwanted software from an Ubuntu Linux...
Read more
DevOps and Development SysAdmin
How to Install Java on Ubuntu
Java is one of the most popular programming languages used for developing anything from lightweight mobile to...
Read more
SysAdmin Web Servers
How to Install & Setup MEAN Stack on Ubuntu
The MEAN stack is an open-source JavaScript (JS) framework used for developing robust web applications. It is...
Read more
DevOps and Development
How To Install Node.js & NPM on Ubuntu 18.04
Node.js is an open-source cross-platform JavaScript (JS) runtime environment. It is used for building fast...
Read more
© 2021 Copyright phoenixNAP | Global IT Services. All Rights Reserved.