How to Add User to a Group in Linux

Home » Security » How to Add User to a Group in Linux

In Linux, a group is a unit in which you can manage privileges for several users simultaneously. Linux groups allow you to manage multiple user permissions quickly and easily.

In this tutorial learn how user groups work in Linux, and how to add users to specific groups. 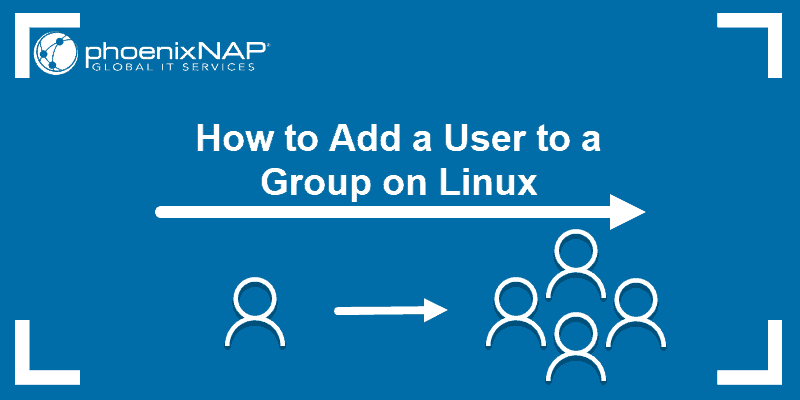 What is a User Group in Linux

In Linux, different users have different roles or responsibilities. Some users might need the ability to execute applications, while others are restricted from accessing specific files and folders.

Groups let you create categories of users with pre-set permissions. Instead of managing permissions for each user account, you can simply add a user to a group to grant the appropriate permissions.

A user can belong to any number of secondary groups (including none). Secondary groups are created to manage individual files and software applications. Members of the group inherit the read, write, and execute privileges for that group.

How to Create a User Group

To create a new group, enter the following:

Replace new_group with the name you want for your new group.

How to Add User to Group

Use the adduser command to add a user to a group:

Use the useradd command to add a user:

You can also use the usermod command to add a user to a group:

The usermod command uses the –append and –group options to append the user to a particular group. Without using –append, the user could be dropped from other groups.

Add a User to Multiple Groups at Once

Use the usermod command to specify multiple groups to add to:

Create a User and Add to Group

This is useful for creating a new user on the fly for a specific software application. Enter the following:

All previous commands have been used to manage the secondary groups a user belongs to. In most cases, a user’s primary group is the same as their username.

To change a users primary group, enter the command:

How to Remove a User From a Group

The gpasswd tool is used for managing groups. To remove a user from a group:

Note: The gpasswd tool can also be used for other administrative tasks such as defining group administrators and setting a password for access to group resources. Use the Linux man command man gpasswd for details.

To delete a group, use the command:

Linux comes with several different groups by default. Some of these, like the sudo group, can be used to grant permissions. Others are hidden, used for system tasks.

To view a list of groups on your system by displaying the /etc/groups file:

To display the groups that a user belongs to with the groups command:

The image above shows the groups that the logged-in user ‘sofija’ belongs to. You can display groups for a different user by specifying the username:

Another method to display the groups a user belongs to, including user ID (uid) and group ID (gid), is to use the id command:

There are a several common group names you might encounter in Linux:

You should now have a good understanding of Linux groups and how to add and remove members from those groups. For more information on specific commands, you can enter the man command to display a manual in your terminal window.

Sofija Simic
Sofija Simic is an aspiring Technical Writer at phoenixNAP. Alongside her educational background in teaching and writing, she has had a lifelong passion for information technology. She is committed to unscrambling confusing IT concepts and streamlining intricate software installations.
Next you should read
Security SysAdmin
How to Check and Change Linux File Permissions
The file permission feature specifies how much power each user has over a given file or directory...
Read more
Security SysAdmin
How to Create a Sudo User on Debian
Sudo stands for superuser do. Sudo is a command used in Unix-like systems to allow a regular user to...
Read more
SysAdmin Web Servers
How to List Users in Linux, List all Users Command
Linux OS is unique because of its multiuser characteristic. It allows multiple users on one system...
Read more
Security SysAdmin
How To Add User To Sudoers & Add User To Sudo Group on Ubuntu
The sudo command is the preferred means to handle elevated permissions. Standard user accounts are...
Read more
© 2021 Copyright phoenixNAP | Global IT Services. All Rights Reserved.