Both virtual machines and containers are used to created isolated virtual environments for developing and testing applications or software. The question is how they differ.

This article examines the two concepts to help understand the difference between a container and a VM. It defines containers and virtual machines separately, as well as side-by-side, to see what makes one distinct from the other. 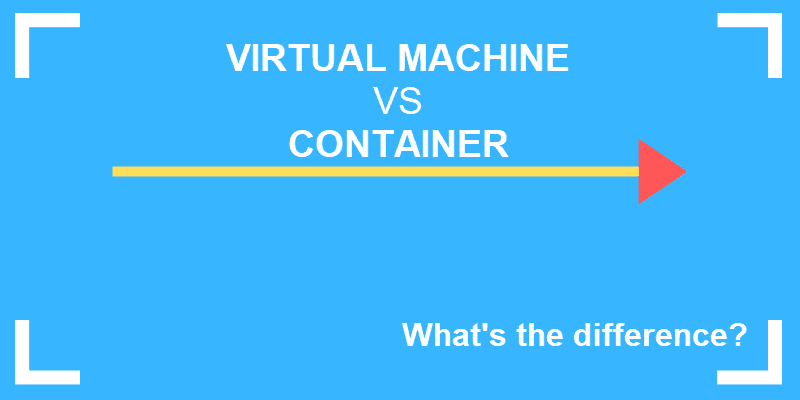 What are Virtual Machines (VMs)?

A virtual machine (VM) is an operating system that shares the physical resources of one server. It is a guest on the host’s hardware, which is why it is also called a guest machine.

There are several layers that make up a virtual machine. The layer that enables virtualization is the hypervisor. A hypervisor is a software that virtualizes the server.

How a Virtual Machine Works

Everything necessary to run an app is contained within the virtual machine – the virtualized hardware, an OS, and any required binaries and libraries. Therefore, virtual machines have their own infrastructure and are self-contained. 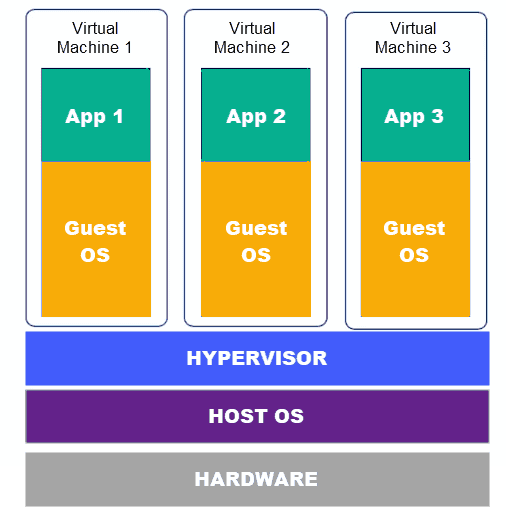 Each VM is completely isolated from the host operating system. Also, it requires its own OS, which can be different from the host’s OS. Each has its own binaries, libraries, and applications.

Virtual machine monitor (VMM): another name for the hypervisor

Host machine: the hardware on which the VM is installed

Guest machine: another name for the VM

VMs reduce expenses. Instead of running an application on a single server, a virtual machine enables utilizing one physical resource to do the job of many. Therefore, you do not have to buy, maintain and store enumerable stacks of servers.

Because there is one host machine, it allows you to efficiently manage all the virtual environments with the centralized power of the hypervisor. These systems are entirely separate from each other meaning you can install multiple system environments.

Most importantly, a virtual machine is isolated from the host OS and is a safe place for experimenting and developing applications.

Virtual machines may take up a lot of system resources of the host machine, being many GBs in size. Running a single app on a virtual server means running a copy of an operating system as well as a virtual copy of all the hardware required for the system to run. This quickly adds up to a lot of RAM and CPU cycles.

The process of relocating an app running on a virtual machine can also be complicated as it is always attached to the operating system. Hence, you have to migrate the app as well as the OS with it. Also, when creating a virtual machine, the hypervisor allocates hardware resources dedicated to the VM.

A virtual machine rarely uses all the resources available which can make the planning and distribution difficult. That’s still economical compared to running separate actual computers.

Note: Learn more about the beneficial role of virtualization in Devops.

What is a Container?

A container is an environment that runs an application that is not dependent on the operating system. It isolates the app from the host by virtualizing it. This allows users to created multiple workloads on a single OS instance.

The kernel of the host operating system serves the needs of running different functions of an app, separated into containers. Each container runs isolated tasks. It cannot harm the host machine nor come in conflict with other apps running in separate containers.

How do Containers Work?

When working inside a container, you can create a template of an environment you need. The container essentially runs a snapshot of the system at a particular time, providing consistency in the behavior of an app.

The container shares the host’s kernel to run all the individual apps within the container. The only elements that each container requires are bins, libraries and other runtime components. 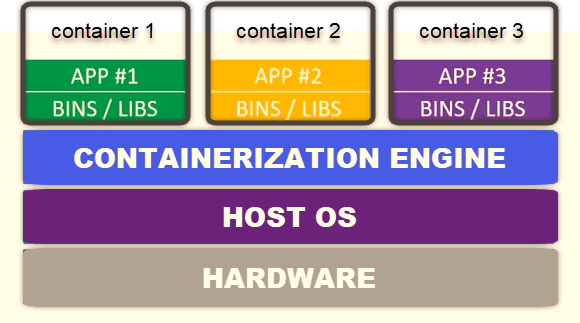 Containers can be as small as 10MB and you can easily limit their memory and CPU usage. This makes containers remarkably lightweight and fast to launch as opposed to deploying virtual machines, where the entire operating system needs to be deployed.
Because of their size, you can quickly scale in and out of containers and add identical containers.

Also, containers are excellent for Continuous Integration and Continuous Deployment (CI/CD) implementation. They foster collaborative development by distributing and merging images among developers.

A container uses the kernel of the host OS and has operating system dependencies. Therefore, containers can differ from the underlying OS by dependency, but not by type. The host’s kernel limits the use of other operating systems.

Containers still do not offer the same security and stability that VMs can. Since they share the host’s kernel, they cannot be as isolated as a virtual machine. Consequently, containers are process-level isolated, and one container can affect others by compromising the stability of the kernel.

Moreover, once a container performs its task, it shuts down, deleting all the data inside of it. If you want the data to remain on the host server, you have to save it using Data Volumes. This requires manual configuration and provisioning on the host.

How to Choose VMs vs Containers

Deciding whether to go for virtual machines or containers depends on the work you want your virtual environment to carry out.

Virtual machines are a better solution if you need to:

Containers are suitable if you need to:

Note: VMs and containers should not necessarily be seen as rivals. Rather, you can use both to balance the workload between the two.

Virtual machines are commonly used for demanding applications, network infrastructure, and apps that will consume most of the resources of the VM.

Before committing to VMs or containers, make sure to consider all the factors that will influence efficiency. Take into account the kind of tasks they will have to perform as well as the resources you have available.

Sofija Simic
Sofija Simic is an aspiring Technical Writer at phoenixNAP. Alongside her educational background in teaching and writing, she has had a lifelong passion for information technology. She is committed to unscrambling confusing IT concepts and streamlining intricate software installations.
Next you should read
Bare Metal Servers Virtualization
What Is VDI and How Does It Work?
This article explains what a virtual desktop environment is and how it can be implemented. It also details...
Read more
Virtualization Web Servers
How to Set Up Apache Virtual Hosts on Ubuntu 18.04
Name-based virtual hosts allow you to have a number of domains with the same IP address. This article...
Read more
DevOps and Development
How To Remove Docker Images, Containers, Networks & Volumes
Docker allows users to create a container in which an application or process can run. In this guide, you will...
Read more
Virtualization
How to Manage Docker Containers? Best Practices
With Docker Container Management you can manage complex tasks with few resources. Learn the best practices of...
Read more
© 2021 Copyright phoenixNAP | Global IT Services. All Rights Reserved.