Ansible Playbook: How to Create and Configure Playbooks

Home » DevOps and Development » Ansible Playbook: How to Create and Configure Playbooks

Ansible is an Infrastructure as Code tool that lets you manage and monitor a number of remote servers by using a single control node.

In this tutorial, we will go over what Ansible playbooks are, how they work, and how you can create and execute them. 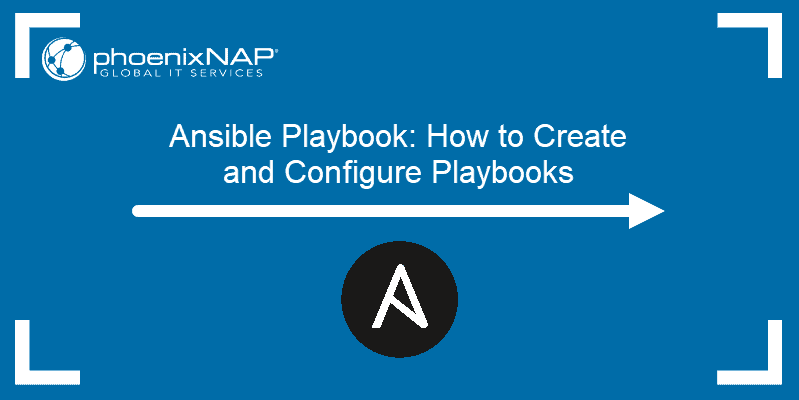 What is an Ansible Playbook?

An Ansible playbook is a list of instructions for jobs that are automatically executed by remote computers in an Ansible network.

Note: If you don’t already have Ansible installed, check our guides on installing Ansible on Ubuntu and Windows.

An Ansible playbook consists of plays. Plays are orchestrated set of tasks that are completed once a playbook is executed. You can add multiple plays to one playbook.

Plays use modules to define which changes need to be made to complete a task. Each module provides a framework for a certain category of jobs and can be customized using arguments and variables.

Ansible playbooks are saved as .yaml files, which makes them flexible and easy to use.

Playbooks are mostly used for:

Ansible playbooks use variables to provide flexibility and ease of use. Variables can be built-in (such as system information) or user-defined.

Note: All variable names in Ansible must start with a letter or underscore and cannot contain any spaces. Numbers are permitted.

In an Ansible playbook, variables are defined by using the vars keyword:

In the example above, we define the greeting variable with the assigned value of Hello World!.

To access the value, put the variable name greeting in double curly brackets:

Once executed, the playbook prints out the message Hello World!

Access a specific value by using {{ array_name[value number] }}, for instance:

Important: Array values are numbered starting with zero, so always choose one number lower than the one you want to access.

Variables with dictionaries combine multiple arrays of values into a single variable:

How to Write an Ansible Playbook?

Create an Ansible playbook by using any text editor available on your system. For instance, create a playbook with Nano:

A playbook begins with three n-dashes (---), which is followed by the playbook name, the name of the remote hosts group that executes the playbook, and additional parameters such as become (execute the playbook as the admin).

The next section contains all user-defined variables. It starts with the vars tag in the same indentation level as the previous section, followed by a list of variables in the next indentation.

Finally, the task list starts with the tasks tag, with the indentation level depending on the type of task and the parameters used.

The YAML syntax allows you to use three periods (…) to end the playbook. Though most playbooks end this way, it is not necessary for the playbook to work properly.

Some important elements of the YAML syntax to keep in mind when writing Ansible playbooks:

For this example, we will create a playbook in the Ansible installation folder: 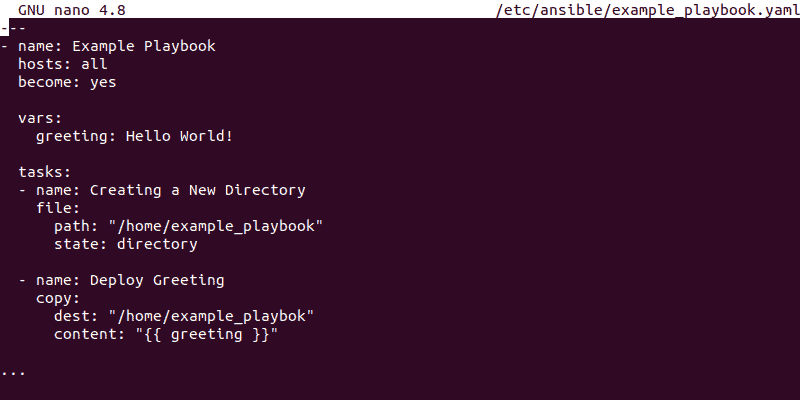 This playbook contains the following elements:

How is a Playbook Executed?

Ansible playbooks are executed in order, from top to bottom. This is true for both individual plays and tasks listed in those plays.

In the example above, the playbook does the following actions, in order:

How to Run an Ansible Playbook

To execute an Ansible playbook, use:

For the purposes of this article, we will use example_playbook.yaml with the -K argument, which lets us enter the root user password for the remote host and execute the playbook as admin:

How to Verify Playbooks

Run a playbook in check mode using the --check flag to verify it. This allows you to see the changes your playbook would make, without actually making them:

For a more detailed overview of potential changes, use the combination of --check and --diff flags:

There are several ways to make Ansible playbooks easier to read and use:

Use the name keyword to define names for plays and tasks. Adding short and straightforward names makes it much easier to know what each play or task does at a glance.

Make sure you add plenty of comments, especially when defining variables and tasks.

Detailed comments help make the playbook even more clear and easy to understand. They also help anyone else using your playbooks.

Format the Playbook for Ease of Use

While you need to follow the rules of indentation for the playbook to work, you can still use whitespace (such as blank lines between tasks) to make a playbook easier to read.

After following this tutorial, you should now have a working knowledge of Ansible playbooks, including how to create and execute one. Playbooks can be used to define a variety of tasks for the remote hosts to perform, including checking if files and folders exist.

If you are considering Ansible alternatives, see how they stack up against each other in our Ansible vs Terraform vs Puppet article.